KAIT Saves Lives With Coverage of Tornado Touch Down 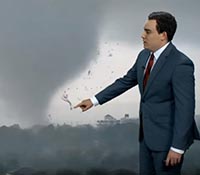 Gray Televisions ABC/NBC/CW affiliate KAIT-TVs Jonesboro, Ark., live coverage of a March 28 tornado touch down is credited with saving lives. The station captured the tornado touch down as it happened from a roof camera and predicted the path. This allowed weather anchors to warn viewers who had not yet received tornado watches or warnings in their areas to get to safety.

Gray Television announced on April 8 that it would donate $10,000 to recovery efforts.