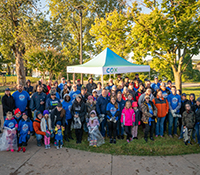 More than 75 employees and volunteers served as the environmental clean-up crew. Early-season flooding deposited more debris onto the rivers edges than is typical, making clean-up efforts especially important to prevent garbage from moving down stream.

We pulled out mattresses, ladders, tires  you name it, said CMG-Tulsa Market Vice President Cathy Gunther. We collected more than 2,200 pounds of trash that is now headed to a landfill instead of polluting our streams and public parks.