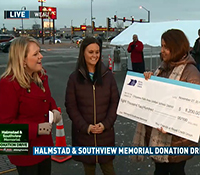 Grays NBC affiliate WEAU-TV Eau Claire, Wis., raised $83,000 on December 4 in memory of three fourth grade Girl Scouts and a parent who were killed by an impaired driver as they volunteered for a highway cleanup. The money will be used for a memorial scholarship in their honor.

WEAU adopted the mantra Community First in 2009, said Creative Services Director Andrew Felix. WEAUs commitment to community goes beyond a slogan; it reflects how we operate as a station.