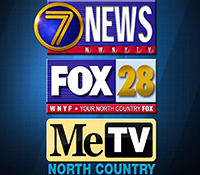 Our news expansion demonstrates our commitment not only to true localism, but to covering the issues most important to our viewers in all areas of Northern New York, said WWNY-TV General Manager Ed Bassler.

With the addition of a 5 p.m. news, 7 News will be presenting more than 27 hours of local news a week., said WWNY-TV News Director Scott Atkinson. Thats a big, expensive commitment for a small TV station, but its one were proud to make.