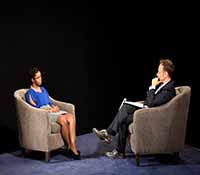 Scripps ABC affiliate WMAR-TV Baltimore News Investigative Reporter Brian Kuebler talked with Baltimore City Police Sergeant Alicia White in the first televised interview of any of the six officers charged in the death of Freddie Gray. The interview aired November 17 at 11:00 p.m. followed by additional reports on-air and online. Sgt. White talked about the charges and her feelings toward Baltimore States Attorney Marilyn Mosby, whom White is suing for defamation and invasion of privacy. This interview is an important element of how we as a station have worked to share all voices of our community in this polarizing case, said News Director Kelly Groft.