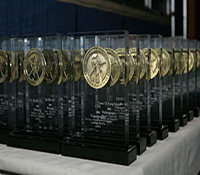 Cumulus WABC-AM New York City was recognized by the Radio Television Digital News Association (RTDNA) with 2016 Murrow Awards for Overall Excellence, Breaking News and Hard News. ABC received won the Breaking News category for its coverage of the San Bernardino Shootings and the Hard News category with its report Attacks in Paris: One Week Later.