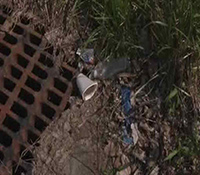 Cox Communications FOX affiliate WFXT-TV Boston helped answer "Whos helping clean up states trash problem?" Investigative reporter Kerry Kavanaugh learned the state rarely goes after individuals who litter. Through a public records request, Kavanaugh learned Massachusetts State Police have issued fewer than 100 citations since 2013. In 2012, they issued 37. The next year they handed out 33, followed by 22 in 2015. As of May of 2016, state troopers had issued just one.