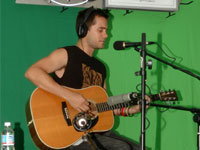 WSUN-FM in St. Petersburg, Fla., uses its "Green Room" to record live performances of major and local artists. These in-studio performances are released in an annual 97X Green Room CD, with all net proceeds going to an environmentally minded charity, most recently the Nature Conservancy, which has protected 1.2 million acres of natural lands in Florida and heads up the Florida Reef Resilience Program. The "Green Room CD Project" raises critical awareness of the benefiting organizations. Promotions for the most recently released volume as well as CD inserts include information on the Nature Conservancy and steer listeners on how to get involved. More than 15,000 copies have been sold to date, and 97X Green Room volumes have consistently been the number one selling rock disc in Tampa during the first week of sales. In a related effort, WSUN is working with the Ocean Conservancy to recruit volunteers for the organizations annual coastal clean up. A Memorial Day benefit concert organized by WSUN raised $6,000 for the Ocean Conservancy, doubling its budget for this years clean up; recyclables that were placed in bins set up at the concert are being converted into material that will be used to make sweaters for children. "Im a native Floridian. The environment is what we live for," said WSUN on-air personality Shark. "As a radio station, we can get people involved with conservancy and raise awareness about organizations doing good in the area."