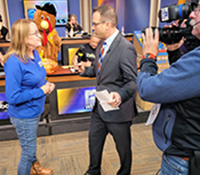 The 11th annual Food For Families Drive, from Hearst Televisions WISN 12 in partnership with Hunger Task Force, generated $131,258 in donations to provide healthy holiday meals for families throughout southeastern Wisconsin. Since the campaign launched in 2012, WISN 12 and Hunger Task Force have helped bring in $1,613,376 for holiday meals.

Year after year people open up their hearts to those in need, said Jan Wade, president and general manager, WISN 12. Lives are being affected in significant ways and we are so very grateful. Our longstanding partnership with Hunger Task Force means a lot to us and to so many people who are helped by this community effort.