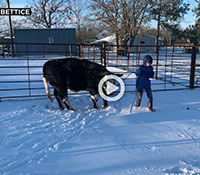 Graham Media Groups KSAT-TV San Antonio, Texas, highlighted on March 3 the estimated $605 million in agricultural losses due to the winter storm. According to Texas A&M AgriLife Extension Service, the figure includes losses to the livestock and poultry industries, the cost of keeping animals warm and the animals that died due to the cold. Dr. David Anderson, the education agencys livestock economist, said that cattle needed to eat in order to create the energy to stay warm. More hay was put out, more feed put out, and (there is) more cost because of that, Anderson said. He added that even though the losses will be costly to cattle and poultry producers, because Texas also has out-of-state suppliers, oftentimes, storms like this cause some short-term market turmoil but really dont result in higher prices for consumers at the grocery store.