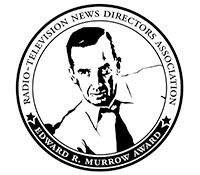 TEGNAs NBC affiliate KING-TV earned a 2021 Edward R. Murrow Award for their reporting on an undetected mold problem in the air handling system in some of the operating rooms at Seattle Childrens Hospital that led to several infections and deaths, and the stations legal fight to release public health records. The Edward R. Murrow Awards are announced each year by the Radio Television Digital News Association (RTDNA) for outstanding achievements in electronic journalism.