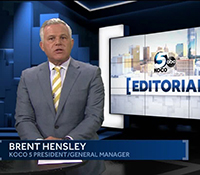 Following the events at the Capitol on January 6, Hearst Televisions ABC affiliate KOCO-TV Oklahoma City, Okla. aired a special editorial report from KOCO President and General Manager Brent Hensley. The editorial discussed the riot, the publics reaction and the need for unity among Americans.