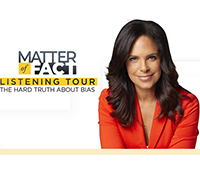 Hearst aired a one-hour digital program on October 8, The Hard Truth About Bias: Images and Reality, a conversation centered around equality. It featured conversations about the relationship of race and privilege, racial stress, the impact of bias in the images and language in news and information, and the creation of stereotypes. The Hard Truth About Bias: Images and Reality is the first installment of Soledad OBriens Matter of Fact Listening Tour, a series of quarterly virtual forums to be presented in 2021. The initiative reaches all of Hearsts consumer media brands, including its 33 television stations.

This is a critical conversation for our country, and we are proud to launch this project, expanding the Matter of Fact brand and leveraging journalism resources from across the company, said Hearst President and CEO Steven R. Swartz. The talented, diverse team bringing this project to life is taking on important topics with insightful guests to provide viewers with a range of valuable perspectives.