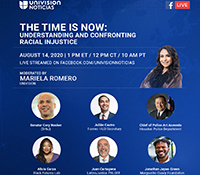 Univision hosted a virtual town hall on August 14 about the underlying and historical racial injustice that has lead to nationwide protests, discussions on policing and police reform and how to move the country forward.