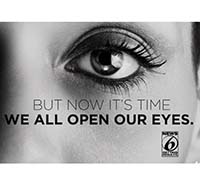 Graham Media Groups WKMG Orlando, Fla., used promotional elements as opportunities to speak directly to viewers about issues of racial injustice. A series of Public Service Announcements (PSAs) aired in June asking viewers to open their eyes and to be part of the solution. The PSAs received national media attention. Watch the PSAs, titled "Injustice", "Equality" and "Open Your Eyes".