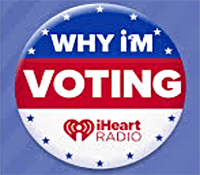 iHeartMedia recently launched its Why Im Voting campaign across all platforms and markets through Election Day, November 5. Musicians, athletes and cultural influencers will share their reasons for participating in this years election. The campaign will also feature a special podcast series featuring artists and celebrities will feature personal stories behind why voting is so important. Listeners can submit their own 20 second or less audio or video message here.

With voter turnout expected to hit record numbers on Election Day, Why Im Voting presents a rare opportunity for people of all backgrounds and beliefs to have their voices heard by millions of their fellow Americans before we cast our votes in November, said John Sykes, President of Entertainment Enterprises for iHeartMedia.