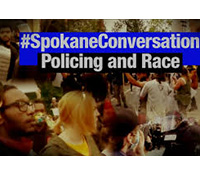 Cowles Companys KHQ Spokane In the first example (in three parts), we partnered with the City of Spokane to create a three part virtual town hall discussion on race and policing. The panel involved civil rights activists, minority youth, the Police Chief and Mayor (among others). The station took viewer questions by phone, Skype, and social media during the two-hour event that aired on the primary and secondary stations and streamed on the website.

KHQ also hosted a community conversation hosted by one of their anchors. People with diverse backgrounds to discuss the Black Lives Matter movement and diversity as it specifically relates to the Spokane region.