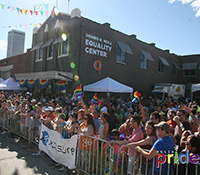 Cox Media Groups Fox affiliate KOKI-TV Tulsa broadcast the Tulsa Pride Parade on June 13. The annual Tulsa Pride Parade, which typically draws more than 35,000 participants, was canceled due to the Coronavirus pandemic. KOKI partnered with Oklahomans for to air a half-hour program featuring last years parade. The 2019 parade commemorated the 50th anniversary of the Stonewall Inn riots, which launched beginning of the LGBTQ+ pride movement. Coxs KRAV-FM is also a media partner of Tulsa Pride and shared the broadcast on its social media channels.

FOX23 is a longtime supporter of the Tulsa Pride Parade and the work of Oklahomans for Equality, said Cathy Gunther, Market Vice President, Cox Media Group Tulsa. Social distancing has been particularly difficult for many in the LGBTQ+ community, with quarantine restrictions cutting them off from traditional support outlets like the Dennis R. Neill Equality Center. We are happy to do our part to help mitigate feelings of isolation that many are feeling during this time of uncertainty.