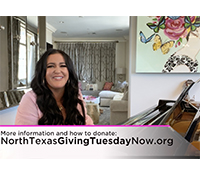 CBS-owned KTVT Dallas partnered with the United Way of Metropolitan Dallas, the Communities Foundation of Texas, the Dallas Cowboys, and musician Caroline Kraddick to present the Concert for North Texas Giving Tuesday Now on May 5. The living room concert featured performances by Josh Abbott, Ryan Cabrera, Jaret Reddick, Jason Castro and Michael Castro, Caroline Kraddick, Leighton Fields, and Abraham Alexander. The program encouraged viewers to support any of more than 3,000 nonprofits with a donation to the organization of their choice. North Texas Giving Tuesday Now raised an estimated $21.76 million for local charities.