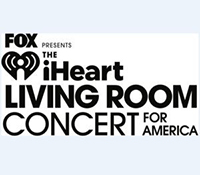 iHeartMedia and Fox raised $8 million during The iHeart Living Room Concert For America, a music event to provide entertainment during the COVID-19 pandemic. The concert aired commercial free on March 29 across all iHeartMedia radio stations and on Fox, during the iHeartRadio Music Awards original broadcast timeslot. Hosted by Elton John, the event will feature performances by Alicia Keys, Backstreet Boys, Billie Eilish, Billie Joe Armstrong, Mariah Carey, and Tim McGraw and others. The performances will be filmed with their personal cell phones, cameras and audio equipment. The event will pay tribute to the health professionals and first responders fighting the spread of the virus. It also will encourage viewers to support Feeding America and First Responders Childrens Foundation.