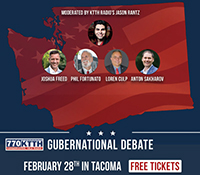 This will be an in-depth look at the issues that matter to voters most, said Moderator Jason Rantz ahead of the event. Candidates will be challenged, the pace will be quick, and solutions to Washingtons biggest problems will be demanded of all the Republican candidates.