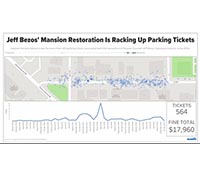 WUSA found vehicles were cited for ignoring no parking zones, as well as blocking crosswalks and obstructing pedestrian traffic. Almost $6,000 worth of tickets were unpaid at the time of investigation.