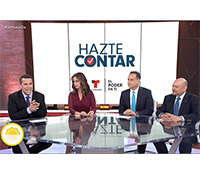 Telemundo and the National Association of Latino Elected and Appointed Officials (NALEO) Educational Fund hosted two phone banks, each open from 7:00 a.m. to 9:30 p.m. On September 17, they focused on citizenship questions and on September 24 addressed voter registration. The campaign is part of Hazte Contar (Be Counted), Telemundos multi-year initiative encouraging participation in the 2020 census and presidential election.