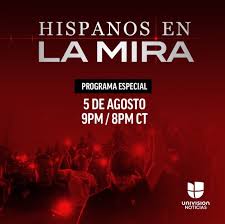 Univision aired on August 5 an hour-long news special, Univision News Presents: Hispanics in the Crosshairs, to address the El Paso massacre on August 3. Univision examined the anti-Hispanic manifesto attributed to the man who killed 22 people in a Walmart (reportedly targeting recent immigrants), the victims stories, the Presidents comments and the gun control debate. Jorge Ramos and Patricia Janoit hosted the special, which also live streamed on Facebook, Periscope and YouTube.