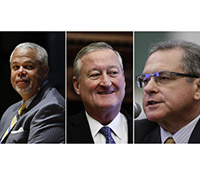 NBCs WCAU-TV and Telemundos WWSI-TV Philadelphia hosted and aired a mayoral debate between incumbent Mayor Jim Kenney and Democratic challengers former City Controller Alan Butkovitz and state Sen. Anthony H. Williams on May 13. The first and only televised mayoral debate featuring all Democratic candidates was broadcast in English and Spanish and was livestreamed on all WCAU and WWSI digital platforms.

Ric Harris, president and general manager of WCAU and WWSI, said, "We are committed to serving the community by providing a forum in which the candidates will discuss the issues most important to citizens residing in Philadelphia."