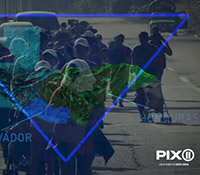 Tribunes CW affiliate WPIX-TV New York City sent Reporter Cristian Benavides and Photographer Kenneth Pelczar to Honduras, El Salvador and Guatemala, Central Americas Northern Triangle, to report what the conditions are like in the root of Americas migrant crisis. Meeting with church officials, local leaders, displaced workers and union representatives, the team gathered information for use in WPIXs news series titled Trapped in the Triangle, to help viewers understand the driving factors behind the current waves of migrants from these countries to the United States.

The story of migration from Central America is one of profound complexity. Its about people not politics. We at [WPIX] are pleased to take our viewers to the heart of a region to discover why so many are willing to risk so much and to come so far, said WPIX Vice President of News and Content Vickie Burns.