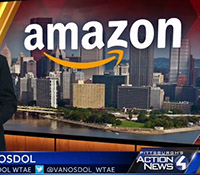 Hearsts ABC affiliate WTAE-TV Pittsburgh was awarded the Pennsylvania Associated Press Media Editors First Amendment Award for their year-long investigative efforts to uncover the secretive bid process involved in attempts to lure Amazons headquarters with over $2 billion in tax incentives. Their ongoing series, titled Pittsburghs Secret Amazon Bid, was said by judges to exemplify the spirit and intent of the First Amendment and demonstrate the ability of broadcasters to overcome great obstacles to bring important stories to viewers.

Its not the first time our station has gone to court and fought for our viewers right to know, and it wont be the last, said Jim Parsons, WTAEs news director.