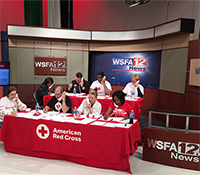 Initial calculations show that stations raised hundreds of thousands of dollars for relief efforts. Online donations are still being accepted and totals continue to be tallied, but results include:


Stations across the region also raised $566,000 for the the American Red Cross. Stations raised the totally directly during broadcast telethon held on March 7.

The Georgia Association of Broadcasters encouraged its member station to participate in the tornado relief efforts. Raycoms ABC affiliate WTVM Columbus held a telethon on March 6 and Nexstars CBS affiliate WRBL and PMB Broadcasting in Columbus held fundraisers on March 7.