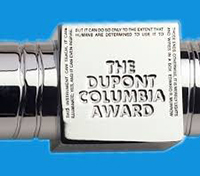 Broadcasters honored on January 22 with duPont Awards for excellence in journalism include: