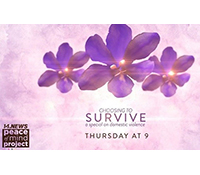 Raycoms NBC affiliate WFIE Evansville, Ind., produced and aired Choosing to Survive, an hour-long special on sexual violence, on October 18 in primetime. The idea came from Creative Director Brandon Ridge, who witnessed a sexual assault while commuting to work and called 911. He later visited a womens shelter, where he met the three survivors WFIE later featured in the special.

We could literally be saving someones life if we motivate them to get out of a relationship, said Ridge.