Broadcasters: A Lifeline During Hurricane Michael 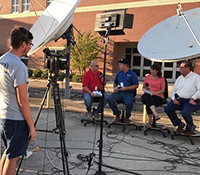 Broadcasters in Florida and across the U.S. provided lifeline coverage before, during and after Hurricane Michael landed on October 10. It caused $8 billion in damage and killed 16 people in Florida and at least 10 in other states. Down power grids and severe damage to newsrooms did not stop coverage. Broadcasters aired more than 70,000 reports on Hurricane Michael, with stations breaking into scheduled programming as many as four times per hour. Radio provided more than 700 hours of coverage. Florida broadcasters aired more than 400 hours of hurricane coverage.

Another familiar aspect is local radio and TV broadcasters were unsung heroes in their first informer roles and in the aftermath, said FCC Chairman Ajit Pai.

Part of the WKGC mission has always been to provide information before, during and after a storm, said Station Manager Scott Kirkman.

Read more about how radio prepared for the storm and how networks covered Hurricane Michael.