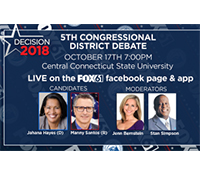 The CBA has a long history of producing political debates, said CBA Chair Steve Rabb. Its part of our mission as broadcasters to provide voters with information about candidates running for public office.