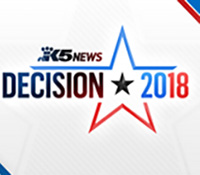 TEGNAs NBC affiliate KING-TV Seattle aired three live debates in October that were open to the public. U.S. Senate debates were held October 8 and October 20. The broadcast of October 17 debate between candidates for the WA-8 U.S. Congressional District included 30 minutes of post-debate analysis.

Our viewers and voters deserve fair and robust debates that allow us to ask tough questions and probe candidates beyond just a sound bite, said Political Reporter Natalie Brand. I hear from the community how much they appreciate the in-depth political coverage that we provide.