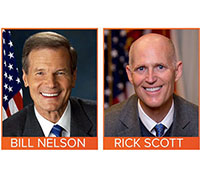 Telemundo-owned WSCV-TV Miami hosted a U.S. Senate debate on October 2 between Sen. Bill Nelson and Gov. Rick Scott. It was the only debate aired in Spanish language.

As part of our (a href="https://www.nbcumv.com/news/wscv-telemundo-51-1-station-south-florida-kicks-%E2%80%9Cdecisi%C3%B3n-2018%E2%80%9D-election-coverage-hispanic?show=1067346&network=5266626">Decisión 2018 coverage, this one-of-a-kind forum will help Floridas Spanish-speaking community understand where each candidate stands on the issues that matter most to them before they head out to the polls to exercise their right to vote this November, said President and GM Jorge Carballo.