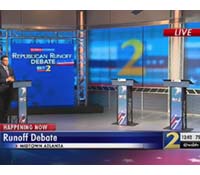 Cox Media Groups ABC affiliate WSB-TV Atlanta hosted on July 15 the final televised debate between Georgia GOP Gubernatorial candidates Secretary of State Brian Kemp and Lt. Gov. Casey Cagle. The runoff election was held July 24. During the debate, each candidate defended himself against attacks. Cagle defended himself over the secret recording that surfaced last month, in which he admits to voting for a bad education bill in order to appease donors and he describes the primary as a contest to see which candidate could be the craziest. Cagle also defended himself for spending over $250,000 in air travel, regularly flying between Atlanta and his Gainesville home. Kemp faced accusations that his office mishandled confidential voter data, which has implications for attempts by Russian hackers, and that he personally defaulted on a $500,000 loan.