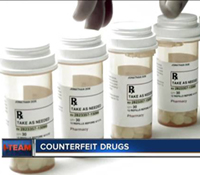 Scripps NBC affiliate WTMJ-TV Milwaukee exposed a local pharmacy for selling fake pills, following a phone call received by WTMJs non-profit partner Call For Action. Volunteers at Call For Action learned that the online pharmacy would close in mid-July as a result of a DOJ action for selling counterfeit drugs. The pharmacy promised consumers they could purchase up to a years worth of prescriptions before the close, but the WTMJ story warned viewers to be wary.