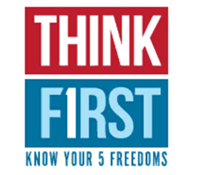 The foundations of the Nebraska Association of Broadcasters and the Nebraska Press Association split the cost of the campaign creative and social media elements for the Think F1rst campaign, which will run July 4  September 30 on radio and television stations throughout the state. The Think F1rst campaign is designed to encourage all Nebraskans to think about the First Amendment and will help educate citizens about the five freedoms it guarantees.