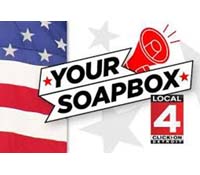 Graham Media Groups NBC affiliate WDIV-TV Detroit launched citizen engagement project Your Soapbox as part of its Decision 2018 election coverage. Through the Your Soapbox roadshow, WDIV will travel across the region to encourage voter participation and hear about issues that are important to viewers. Voter turnout in 2014 in state elections was less than 50 percent in many counties around Detroit. The station also hosted several 4 Minute Debates at the recent non-partisan Mackinac Policy Conference.

Everyone should vote their own interests and we, as a non-partisan news organization, need to not only report the stories that are interesting but the policy decisions big and small that affect our viewers, said General Manager Marla Dutz.