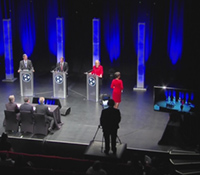 Part two of the Tennessee Governor Debate Series, held June 20 in Nashville, will focus on legislative and crime issues. The third debate on July 20 in Knoxville will focus on education and health care.

The Tennessee Governor Debate Series is a unique opportunity for local voters to hear directly from the candidates on the issues that matter most to them before heading to the polls this summer, said Nexstar President Tim Busch.