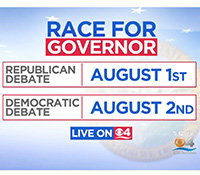 CBS Television Stations WFOR-TV Miami will host statewide Florida Gubernatorial debates. The Republican and Democratic primary debates will be held on August 1 and 2 at 7:00 p.m. The one-hour debates will be broadcast statewide through a consortium of TV stations in Floridas 10 major media markets.

These high-profile events will attract a significant and diverse viewership, said Vice President and General Manager Adam Levy. Our commitment is to produce an excellent exchange among the candidates in both the Republican and Democratic primaries.