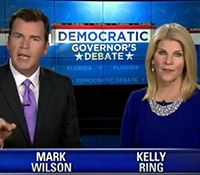 Fox-owned WTVT Tampa, Fla., hosted a debate between all four leading Democratic candidates for Florida governor. The debate took place at the stations studio in Tampa on April 18 and was broadcast at 6:30 p.m. The debate covered topics important to the Tampa community, such as school safety, crime, mental health services and hurricane preparedness. Watch the debate here.