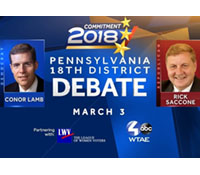 Hearsts ABC affiliate WTAE-TV Pittsburgh partnered with The League of Women Voters of Greater Pittsburgh to host a live debate in the race for Pennsylvanias 18th Congressional District on March 3. The hour-long debate aired commercial-free and also streamed live, featuring special election candidates Democrat Conor Lamb and Republican Rick Saccone, Pittsburghers deserve to see the clearest picture of who will represent us in Congress, said WTAE President and General Manager Charles W. Wolfertz III. We are honored to give viewers a chance to see each candidates vision for important issues such as tax overhaul, infrastructure, gun safety legislation and national security.