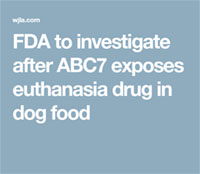 Sinclairs ABC affiliate WJLA-TV Washington, D.C., broke a story on February 8 when its investigative team exposed numerous dog food brands for containing the euthanasia drug pentobarbital. This has caused pets to become ill, and in some cases, die. The story ran on Sinclair stations across the country and was amplified by The New York Times and The Washington Post. The J.M. Smucker Co., which produces the dog food, voluntarily recalled the tainted product from thousands of retail stores nationwide.