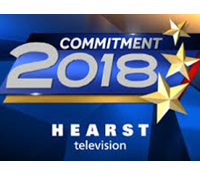 Hearst Television is significantly expanding and updating its pledge to devote extensive television and digital news coverage of election discourse throughout 26 television markets.

Under the group-wide Commitment 2018 banner, Hearst Television stations have pledged to provide analysis on all their media platforms of a defined major issue each month leading up to Election Day. Hearst stations are addressing topics such as health care, immigration, infrastructure and gun rights. Hearst will also add investigative resources at its Washington, D.C., bureau as part of its efforts to track the positions and truth-checking the messages of politicians and candidates.

As local journalists, its our responsibility to drill down on issues of specific importance to local viewers in a relatable manner, said Barbara Maushard, Hearst Television senior vice president, news.