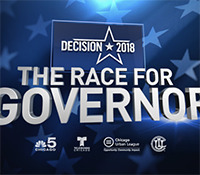 NBC-owned WMAQ-TV and Telemundo-owned WSNS-TV Chicago partnered with the Union League Club of Chicago and the Chicago Urban League to host the first televised 2018 Illinois Democratic Gubernatorial Forum on January 23. Both stations aired and streamed the hour-long forum live, with WSNS also providing Spanish-language captioning. Our main priority is to keep our Spanish-speaking viewers informed about news that affects their lives, said WSNS Vice President of News Diana Maldonado. The broadcast of this gubernatorial forum is certainly part of our commitment to the community we serve.