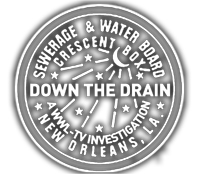 TEGNAs CBS affiliate WWL-TV New Orleans aired an investigation into the citys sewer and water board on November 15. The hour-long primetime special, Down the Drain, was inspired by a failure of the citys pumping and drainage system during a typical rain storm on August 5. WWL spent months investigating why it failed and how many millions of dollars are wasted in maintaining the century-old system with more than 1,200 miles of underground drainage pipes, some that go nowhere. WWL also launched a Facebook group for residents to discuss concerns. We are working to continue to hold officials accountable, both elected and otherwise, as the problems with this utility continue to plague residents in the metro New Orleans area, said Investigative Reporter Katie Moore. It has been hugely successful for both our reporting and for people to have a place to commiserate and to feel like their voices are being heard, because they seem to feel like their concerns are falling on deaf ears with the Sewerage & Water Board.