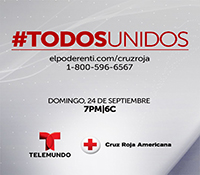 Telemundo has raised more than $12.9 million for American Red Cross relief efforts following natural disasters in Mexico, Puerto Rico, Texas, Florida and the Caribbean islands. Under the banner of Todos Unidos (All Together) the Telemundo Networks, plus Telemundo and NBC owned stations, raised $7.5 million through a telethon held September 24. The live broadcast produced from Miami, Mexico, New York, Puerto Rico, Houston and Los Angeles aired simultaneously across Telemundo stations. The group had already raised $5.5 million through multiple fundraising efforts following Hurricane Harvey. Our stations are committed to helping communities have the news, information and resources they need to recover from the natural disasters that have affected so many, including our very own employees, said Telemundo Station Group President Manuel Martinez.