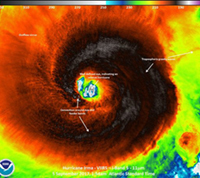 Television broadcasters have raised $45 million through on-air campaigns and direct donations for relief efforts supporting victims of Hurricanes Harvey and Irma. This amount is based on publicly available fundraising totals, social media and information provided to NAB. In addition to fundraisers, broadcasters have collected food, bottles of water, clothing, hygiene products and other supplies. The estimate does not include fundraising totals for Hurricane Maria relief efforts, as many efforts are on-going.

"Local broadcasters served as first informers and saved countless lives as Harvey and Irma tore through Texas, Louisiana, Florida, and the Southeast," said NAB President and CEO Gordon Smith. "Now, our attention turns to the long recovery ahead. Im so proud of the generosity and compassion shown by broadcasters who are helping rebuild and restore hurricane-ravaged communities."