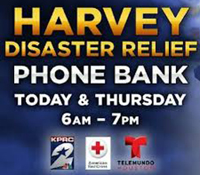 Graham Media Groups NBC affiliate KPRC-TV and Telemundo Houston raised more than $4.2 million in a fundraiser held August 30-31 for the American Red Cross. Of this total, over $1 million came from individuals calling in pledges and nearly $270,000 came directly from Click2houston.com. Corporations pledged the rest. In addition, a Walmart representative visited the studio to present the Red Cross with $10 million.