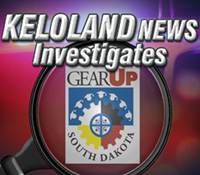 Nexstars CBS affiliate KELO-TV Sioux Falls, S.D., aired an in-depth investigative report on the GEAR UP scandal. The U.S. Department of Education awarded South Dakota $62 million in 2005 to help prepare Native American students for college. The state was required to match every federal dollar. KELO uncovered several issues with the grant money, including a lack of data proving that any Native American student attended college because of GEAR UP.